Drama, from the Greek, to do, act, or perform. A composition in which a story is related by means of dialogue and action and is represented with accompanying gesture, costume and scenery, as in real life, a play. The simplest story; a cow in a field, a day passes, articulated by a sequence of simple actions. Another day passes and the actions only vary with the chance events that make one day different from any other. Between the days three traditional songs about work, love and death are sung. These are stories too, but of generalisation, metaphor and myth, whereas the cow’s drama follows only the surface pattern of events, the specific. 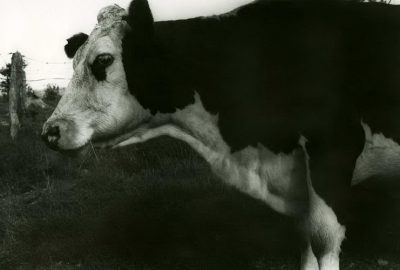 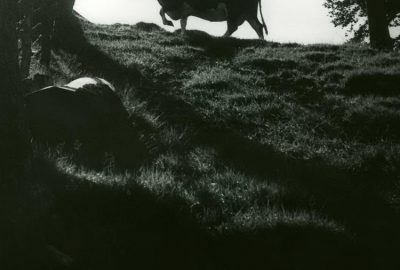 ‘Bush’s film The Cow’s Drama is exemplary in this respect. It is all about looking: the camera’s indifferent eye watches farmer and cow, cow and calf locked together in the recurring drama of their daily round. Bush’s involvement is undoubtedly subjective; his method of observation is objective. The result is the creation of an ironic distance which is interposed not simply between the film-maker and his subject but between the audience and the film as an object of the audience’s attention. In the end language supersedes narrative’ Jon Thompson – curator The British Art Show